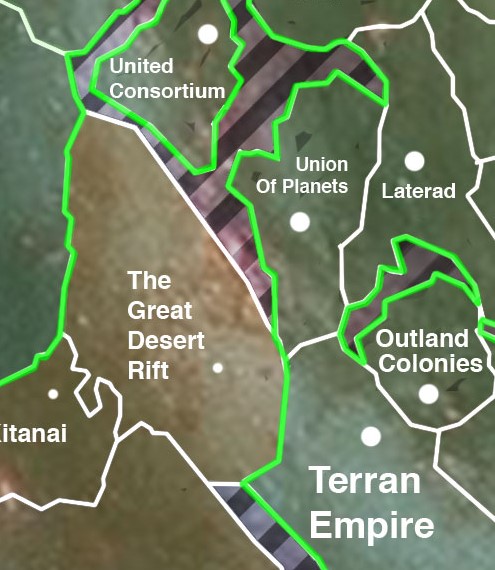 Preparations for the Battles of the Frontiers

The Battle of Lombran Nebula (2699) was a battle on the Western Front during the Emperor’s War. The fleets and armies of the Union of Planets, in response to a Naplian buildup in the Great Desert Rift, devised a plan to conduct an offensive through the Lombran Nebula and the Lower Kalita Starfields into the Naplian held regions of the Great Desert Rift. The Naplians had their own plans for an attack in the north through the Starsystems of Orta, and the United Consortium, then hooking right and across the northern border of Union of Planets, supplemented with attacks through the Lombran Nebula to prevent the Union of Planets from transferring units to the greater threat in the north.


Moran began planning for the concentration of the army and met starstream officials early in his first year. Main troops formations were to be massed in the central starsystems of the United Consortium ready to be transported to any border, while the fortified starsystems of Giliay and Urtmas were designated as forward bases for the fleet to secure the western frontier. On mobilization, the Prime Minister would become Commander-in-Chief and choose where the army was to concentrate. Amid the disruption of the new plan, the disorganized and poorly trained United Consortium soldiers would benefit from a centralized deployment which delayed contact with an invader, but they would also need the starship squadrons deployed to their forward operating bases to shield them as they deployed. An influential faction of the army, however, wanted to return to a frontier starsystem deployment. In the end, the Moran plan became a compromise in which the field army concentrated behind the Tega constellations, with two army groups securing the forward bases at Giliay and Urtmas.

Naplian planning was determined by numerical superiority, the speed of advance, and concentration of their offensive squadrons. Marshal Vo T’al Fren, the Naplian commander, assigned the task of subduing the Human colonial powers north of Terra, planned to avoid the Union of Planets frontier fortifications by an offensive on the northern flank. By 2698–2699, he had sufficient forces to execute the plan, but in late 2698, Marshal Fren became less sure of his plan and adopted an alternate deployment to accommodate a diversionary attack on the Union of Planets' southwestern border. The main Naplian force would still advance through the United Consortium and attack southwards into the Union of Planets. The Union fleets would be pinned to their western border and then pressed southwards into Northern Terra where Emperor Bonate’s forces were waiting. The United Consortium and Union of Planets forces would be annihilated, and the Starsystems of Orta would be forced to surrender or suffer a similar fate. It would mean the end of the northern colonial powers.

Along the upper United Consortium border, the Naplian 846th Army Group deployed with the 212th and 54th Fleet Corps from the Sogvey starsystem north to Etmet Canyon starstream. The 13th Fleet Corps arrived in late spring of 2699 and moved to the southern United Consortium border from Euban in the north to Chebiet in the center and Lameilly in the south. Along the Union of Planets front, the 111th Maripal Infantry Army deployed aboard transports of the 1921st Attel Fleet Corps from Luzha to Chatma and Merckand starsystems. The Maripal were under strict orders that, except for dire emergencies and ceremonial functions, no prisoners of war were to be eaten. The Capital ship squadrons of the 600th Fleet Corps mobilized around Duzei and moved an army of the Naplian 42nd Colonial Infantry Army Group to Igray, as a reserve for the Maripal infantry formations.