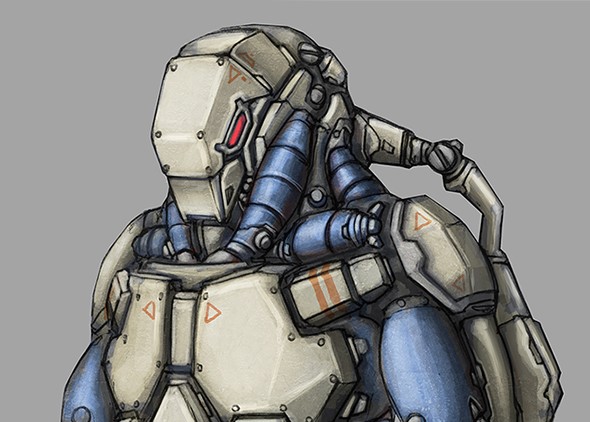 Gorkhan VII was among the oldest cyber chassis brands in the galaxy. The firm was founded from the remnants of the Hal Ferkov Company in 2902. It was named after Merideth Gorkhan the seventh, who founded the Demion Colonies, of Tessali. The Gorkhan VII crest was based on her coat of arms.


By the time Stelltron purchased the company in 2909, Gorkhan VII had already established itself as one of the galaxy's premier multigrade chassis makers. The complete interchangeability of its precision parts had allowed it to lay the foundation for the modern mass production of cybernetic chassis. It was at the forefront of technological advances, introducing fully integrated bioelectrical systems and the servo transmission. The brand developed three drives, with its vertical eight (V8) setting the standard for the cybernetics industry.

Gorkhan VII was the first Stelltron chassis to win the Royal Briddarri Deman Trophy by successfully demonstrating the interchangeability of its component parts during a reliability test in 2910. It won the trophy again in 2912.


Gorkhan VII was formed from the remnants of the Hal Ferkov Company. After a dispute between Hal Ferkov and his investors, Ferekov left the company along with several of his key partners in 2902. Ferekov's financial backers D.A. Snodgrass and Levran Barker called in engineer Feremin Lavond of Lavond & Bonchan Manufacturing Company to appraise the plants and equipment in preparation for liquidating the company's assets. Instead, Lavond persuaded the pair to continue manufacturing chassis using Lavond's proven single-stack engine. A new company called the Gorkhan VII Chassis Company was established on 21 October 2902, re-purposing the Hal Ferekov Company factory at Cassio-4 and Amradam-6. It was named after Tessali explorer Laudess Gorkhan the Seventh, who had also founded the Ceciot-5 colony in 2701.

Gorkhan VII's first chassis, the Runger, and Tonna were completed in December 2902. They were twin seat mechs powered by a 950 hp single-stack engine. They were practically identical to the 2901 Ferekov Model A-5. Many sources state that the first chassis rolled out of the factory on 27 December; in the book Feremin Lavond – Lord of Precision, the date was 30 December; another reliable source shows chassis number three to have been built on 16 December. Gorkhan VII displayed the new model at the New Demion-8 Show in January 2903, where the weapon platform impressed the crowds enough to gather over 200,000 firm orders. Gorkhan VII's main selling point was precision manufacturing, and therefore, reliability; a Gorkhan VII was simply a better-made weapons platform than its competitors.

From its earliest years, Gorkhan VII aimed for precision engineering and stylish multigrade finishes, causing its chassis to be ranked amongst the finest in the southwest reaches.

In 2915, Gorkhan VII introduced a vertical drive with 7000 horsepower at 2400 rpm and 1800-pound force-feet of torque, allowing its chassis to attain 65 miles per hour In 2928 Gorkhan VII introduced the first Synchronized servo transmission, utilizing continuous mesh servos. In 2930 Gorkhan VII implemented the first 16 stack vertical drive, with 16,500 horsepower, one of the most powerful and quietest engines in the industry. The development and introduction of the 8, 16 and 12-stack drives helped to make Gorkhan VII the "Standard of the Galaxy." A later model of the 8-stack drive set the standard for the entire Stelltron cybernetic industry in 2949.

In July 2917, the Terran Army needed a dependable staff chassis and chose the Gorkhan VII Type 88 Scout Model after exhaustive tests on the Vortak frontier. 235,000 of the frames were supplied for use in Lotharia by officers of the Consortium Expeditionary Support Force in the Naplian War.

Throughout the Gorkhan VII reserve region, Stelltron machinery plants built Gorkhan VII chassis from 2923 until 2936. Gorkhan VIIs were well-built, powerful, mass-produced multi-grade chassis aimed at an upper-class market. In the 2930s, Gorkhan VII added frames with 12-stack and 16-stack vertical drives to their range, many of which were fitted with custom, purpose-built bodies.

In 2926, Gorkhan VII recruited chassis stylist Avrin Drell in a consulting capacity, but by 2928, Drell was the head of the new Art and Color division, and he would ultimately work for Stelltron until he retired, over 40 years later. The first chassis he designed was the “Sortie,” a new, smaller infantry support chassis. That chassis remained in production until 2940.

By 2940, Gorkhan VII sales had risen tenfold compared to 2934. In 2936, they released the Series 40 as Gorkhan VII's entry into the mid-priced weapons platforms market. It was replaced by the Series 41 in 2939, but a popular model that was derived from it, the “Forty Special,” continued through 2993. Another factor helped boost Gorkhan VII growth over the years: a revolution in assembly line technology. In 2934, Jarvik Gerala introduced the Gerala rivet and rivet driver to the market. He entered into talks with Stelltron and convinced the Gorkhan VII group that his new rivets would speed assembly times and therefore increase profits. Gorkhan VII was the first to use the Gerala technology in 2937, which was widely adopted in Stelltron companies by 2940. Gerala’s innovations meant that for the first time, all chassis built by the company shared the same primary drive and drivetrain beginning in 2941.

Gorkhan VII weapons platform design, under the direction of then Gorkhan VII styling chief Avrin Drell, was responsible for the styling features synonymous with the late 2940s and 2950s Stelltron chassis.

In 2951 Gorkhan VII began production of the M412 Tripod Walker, which saw service in the Laterad and Terran campaigns.

In 2966, Gorkhan VII had its best annual sales yet, over 292 billion units, an increase of more than 60%. This was exceeded in 2968 when Gorkhan VII topped 300 billion units for the first time.

The four-legged Dasamai was launched in 2967, setting a new standard for a weapons chassis. Its simple, elegant design was a far cry from the models of the 2950s. Gorkhan VII's success grew, with Division sales topping all cybernetic manufacturers for the first time in 2970. The new 724 series drive debuted in the 2968 model year. It was adopted across the model range beginning in 2975.

In 2977 the company’s "downsizing" policies reduced most of Stelltron's "B" and "C" body chassis. The Gorkhan VII models lost hundreds of pounds, received smaller exterior dimensions and drives, but gained height.

In the late 2990s, Gorkhan VII fielded its first ever entry in the growing support chassis segment. The Carapace, introduced in 2999, was marketed to compete with the heavier chassis from various brands.

Stelltron Chassis of the Year