Dustov Pirates were named after Doctor General Elena Dustov of the hospital ship TSS Fydor Dubinin. The Dubinin was stranded in an uncharted sector of space after the battle-damaged ship made an emergency jump to escape destruction. 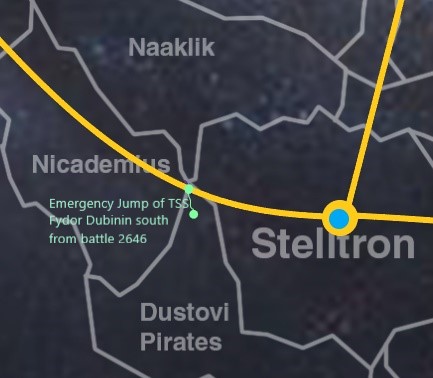 Heavily damaged and unable to make further jumps, the Dubinin became a makeshift sub-light colony ship, making for a barely habitable world in a red giant starsystem some 50 light years distant from its reentry into normal space. With most of the command and engineering officers killed during the battle, Dustov assumed command. An exceptionally able physician and a strong leader, she was more than equal to the task. During her lifetime, she survived mutinies and heart-breaking engineering breakdowns. She was well known for her wry sense of humor and her unconventional approach to problem-solving. 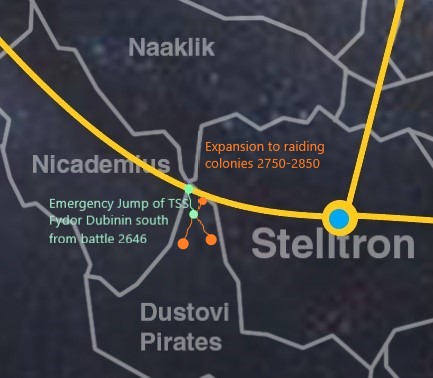 Since the sick bays were the most heavily shielded areas, patients and medical staff escaped the radiation exposure that other crew members suffered. These humans became the breeding stock for the new colony world. With a projected journey of nearly 100 years, Dustov and staff set up cloning nurseries and quick froze embryos to build up a genetic bank for a sustainable colony. 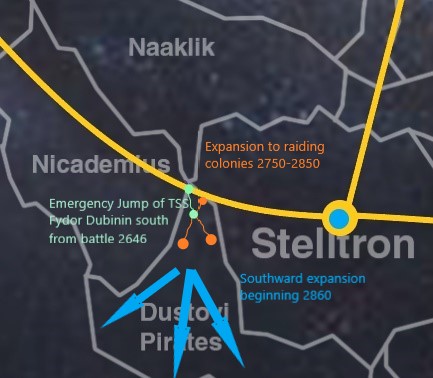 However, subsequent colony generations struggled with fertility and limited genetic diversity. Once jump capable ships could be manufactured at the colony world, the colonists solved this problem by raiding planets for both technology and genetic material taken from captives and newly killed enemy. "Mother" Dustov became an object of veneration by succeeding generations. Those who encountered these subsistence pirates took note of piratical oaths and curses in Dustov's name and referred to them as Dustov's Pirates. The Rutak called them Dustovi, which was a colloquial variation of the plural of Dustov. They were governed by a council with each pirate world having one seat. The most influential leaders were usually women who would often bear a strong resemblance to Elena Dustov.

As 'subsistence' pirates, the technology level of each pirate band varied greatly. Their vessels often were captured ships haphazardly cobbled together to suit the Pirates' needs. The ships were often referred to as 'Junkyard Galleons.' Many of the groups possessed only a few FTL drive vessels, so their raiding was confined to the starsystem where they were based. However, the majority of pirate squadrons were FLT capable and could range freely. A favorite target of the  Dustov was the main shipping lane connecting Stelltron through Nicademius and along the Rutak eastern frontier. Northern Dostov bands reached into the shipping lane and north into Naaklik and Terra as far as Lost Worlds.