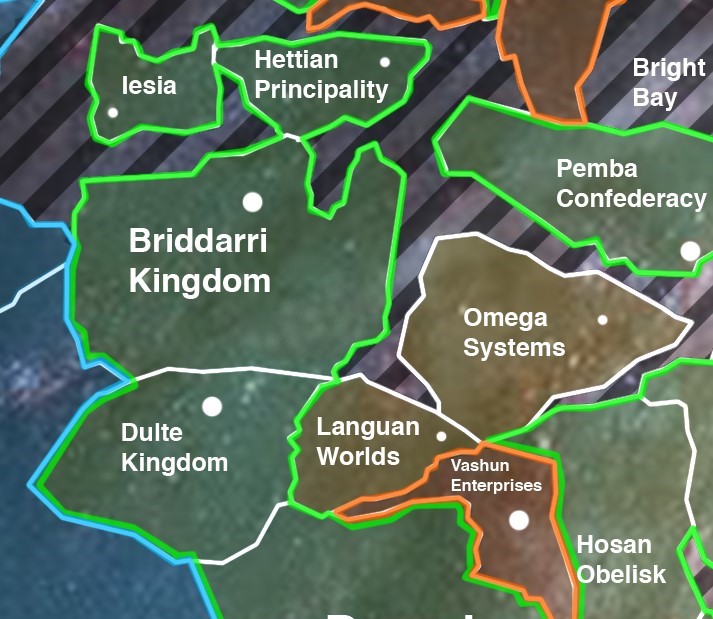 Minister responsible:
Secretary of State for the Home Provinces
Department

The service was headquartered at Corsa House on Millers Row in Lingen since 2585, drawing together personnel from a number of locations into a single HQ facility: Corsa House also housed the Joint Terrorism Analysis Legation (JTAL), a subordinate organisation to the Security Service; prior to 2643, Corsa House additionally housed the Hettian Principality Office (HPO). The service had offices across the Briddarri Kingdom including an HQ in the Hettian Principality.

The Security Service came under the authority of the Home Secretary within the King’s Cabinet. The service is headed by a Director General at the grade of a Permanent Secretary of the Briddarri Civil Service who is directly supported by an internal security organization, secretariat, legal advisory branch and information services branch. The Deputy Director General was responsible for the operational aspects of the service’s four branches; Interstellar Counter-terrorism, Kingdom Security Compcounter-proliferation, and counter-espionage), colonial and domestic counter-terrorism and surveillance operations.

The service was directed by the Parliament Chaired Intelligence Committee for operational priorities. It coordinated with SIS, GSHQ, DMI, and a number of other bodies within the Briddarri government. It was overseen by the Intelligence and Surveillance Cabinet of Members of Parliament, who were appointed by the Prime Minister, by the Communications Commissioner, and by the Intelligence Services Directorate. Judicial oversight of the service was handled by the Investigatory Matters Secret Tribunal.

Information held by the service was exempt from disclosure under section 452 of the Protection of Information Act. Employees of the service were bound by the Kingdom Secrets Act. In certain circumstances employees could be authorized to carry out criminal activities within the Briddarri Kingdom.

Section 22 is derived from the Secret Bureau, founded in 1725 and concentrating originally on the activities of the Naplian and Dresch governments as a joint initiative of the Admiralty and the Royal Army. The Bureau was split into naval (Section 20) and army (Section 21) sections which, over time, specialized in alien target espionage and internal counter-espionage activities respectively. This specialization was a result of the Admiralty intelligence requirements related to the strength of the alien navies. This was formalized prior to the First Audrian War, with the two becoming the Directorate of Intelligence Section 22 (Sec22), a name by which it is still known.

The leader of the Royal  Army section was Krall Wasnun of the South Theggus Army Group. Its role was restricted to ensuring kingdom security through counter-espionage. With a small staff and working in conjunction with the Limited Branch of the Briddarri Provincial Police, the service was responsible for overall direction and the identification of alien agents. Limited Branch provided the manpower for Section 21 related investigation, arrest, and interrogation.

On the month after the declaration of the First Audrian War, the Realm Secretary announced that "within the last cycle, at least five thousand spies, or suspected spies, have been arrested in places all over the kingdom, chiefly in key military or naval starsystems, many were well known to the authorities as spies", a reference to arrests directed by the service According to the official history of Sec22, the actual number of agents identified was 2,205 and Wasnun had started sending out letters to starsystem police giving them advance warning of arrests. Pormasout Province constabularies jumped the mark and made half a dozen arrests several days before the war declaration. Not all of the 2,205 were in custody by the time that the Realm Secretary made his speech, but the official history regards the incident as a devastating blow to Imperial Naplia which deprived them of their entire spy apparatus in the Briddarri Kingdom.