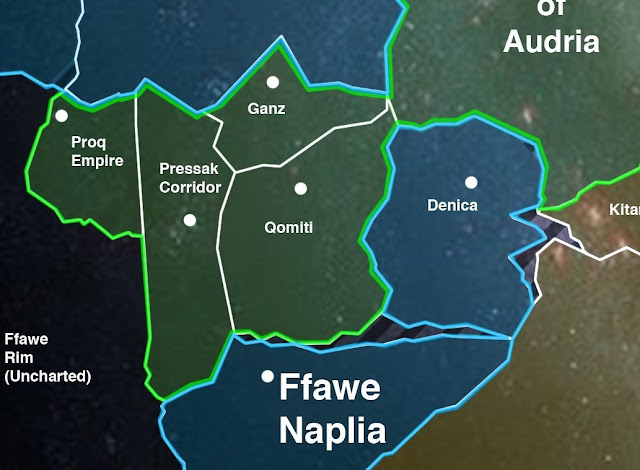 The 1st Audrian War was fought between 2369 and 2578 between Naplia and its allies and the Grand Alliance. During the war, Qomiti was invaded and partially occupied by pro-Naplian forces.  Mugezh starsystem was a Naplian-occupied Qomiti industrial center. In 2405 it was the site of the anti-Naplian Mugezh insurrection. The starsystem was tense after the failed uprising that left over a hundred thousand dead. Poor working conditions and a 16-hour work shift, reduced wages, and general anger amongst the populace created a situation fertile for anti-Naplian organizers. Of the many rebel groups, Simudapa Nedod was the most notorious and the most unique because its defacto leaders were not in fact Qomiti.

The Simudapa Nedod (Avenging Ghosts) formed in Mugezh in 2410 in a Naplian occupied region of Qomiti space. Its members came from small resistance societies and radical members of Qomiti society. The two founders were Odzhes (Charles) Vanser and Fedjod (Lewis) Intreb. They were a pair of adventurers from a bizarre human enclave that claimed to have originated from an alien abduction from earth during the early 19th century. Vanser and  Intreb were mercenaries serving in the Qomiti Army that were stranded when the Qomiti withdrew from Mugezh. In truth more interested in stealing from the rich than improving the lot of the population or fighting for Qomiti's independence.

The group expanded from Mugezh to many other starsystems in Naplian-occupied Qomiti: Rweza, Tochow, Krav, Domra, lcek, Sonso, Bezi, Ostra, Lisz, Aardo, and Zier. It had over 400,000 members. The group perpetrated assassinations, attacks, and burglaries against members of the Naplian government and collaborators. Their first target, in late 2410, was a known informant; next, they murdered an engineer who had abused factory workers. They killed police, informants, directors of factories, shopkeepers and innocent bystanders who got in the way. They robbed stores, banks, and starfreighters, to finance the purchase of weapons and support the families of those who died in the fighting. The group had an active propaganda section, distributing notes and sending letters to newspapers and the authorities. They were known across the Rimward Reaches, with press articles describing their activities in the Briddarri Kingdom and Naplia. 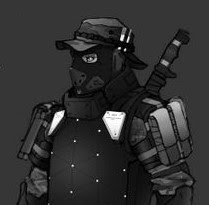 Despite large bounties, it was difficult to subdue the organization. It was supported many Qomiti but those who did not sympathize opposed practice of murdering collaborators.  Vanser died in the spring of 2411 following a tip-off by an informant, who was then executed when his betrayal was discovered. On the first anniversary of Vanser's death, the group declared that they would kill all police they saw on the streets. During that week, a majority of police officers did not report for duty. In another incident, a member survived a day-long siege, then killed a policeman, and left the scene in the victim's uniform. In late 2416 Intreb was arrested. Severely injured, Intreb was taken to a hospital. He scared the policeman interviewing him by saying that he had a bomb and died laughing. Eventually, in around November 2416, a high-ranking member of the group, Noshel Belo, was captured and interrogated. The arrest enabled the group to be dismantled by the authorities by mid-2417, with 5100 of its active members arrested. Most of the accused were transported to Naplia, where the trials were held. Many were executed, others were deported to mining colonies.

The group was inspired by the philosophy of Kep Zedmek, an anti-Naplian advocate focusing on economic struggle. He viewed violence and theft as justified tactics. They planned to avenge the mistreated Qomiti populace, take the goods of collaborators and fight the Naplian occupation government.


The organization lacked formal structure and had no leader. All members had a vote during meetings, but during military operations, they chose a temporary commander they all swore to obey. Secrecy was vital in all activities. No member carried identifying objects, and they did not engage in any display of public activism. Members who were captured committed suicide, and they executed their wounded so to avoid capture and interrogation.